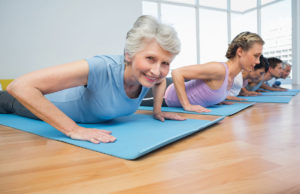 Hot or Bikram Yoga is a hot system of modern yoga that has been synthesized from traditional Yoga techniques. It is performed in a room at a whopping 105 degrees. It became popular in the early 1970s. All Bikram Yoga beginning series classes run for 90 minutes and consist of the same series of 26 postures, including two breathing exercises.People are saying that the stiffness in their joints was dramatically less and they were able to get out of bed with more ease.

The 90 minute classes consist of a fixed series of 26 poses, each done twice with a short rest in between. Check your flexibility improvement after each class. One of the common misconceptions about Hot and Bikram yoga is that with the heat people are prone to overstretch and hurt themselves. The opposite is true. For inflexible people stretching in a cold room is a recipe for injury. The heat allows you to open your muscles and create wonderful natural flexibility. Like any yoga practice, you can over do things and hurt yourself, but the heat doesn’t lead to increased injuries. You must listen to your body and learn the difference between an intense stretch (good) and sharp shooting pain (bad). Your flexibility will ebb and flow by day, week and month, just like your practice. Know that gaining significant flexibility is within reach. The hatha yoga postures that make up this series have endless health benefits.

Yoga gets your heart pumping. A large number of studies show that yoga benefits many aspects of cardiovascular health. Bikram and most hot yoga requires students to hold each yoga pose for 30 to 60 seconds while breathing through your nose and maintaining stillness. Research suggest that performing these types of yoga poses benefits the cardiovascular system. This would be especially good for Rheumatoid arthritis patients since they are at an increased risk for cardiovascular disorders.

Hot Yoga Is Easy on the Hand and Wrist

Wrist pain is one of the most common issues seen in yoga. Several of the Yoga poses require body weight on the hands. If your arthritis is in your hands Bikram or hot yoga avoids poses like that- in fact , the last 30 minutes of class is spent doing poses while sitting kneeling or lying on the floor.. And if sitting on the floor or kneeling or laying on the floor is a problem a good instructor will give you other options.