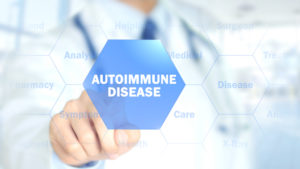 Rheumatologists specialize in the diagnosis and treatment of certain autoimmune diseases. The purpose of the immune system is to fight off harmful substances in the body, such as infections. In order to do this, the immune system must be able to tell the difference between normal healthy parts of the body (self) and harmful intruders (non-self), just as police officers try to distinguish “good guys” from “bad guys.”

The immune system has many complex mechanisms for achieving this and every once in a while, something goes wrong. If the immune system incorrectly labels a normal healthy part of the body as being harmful, it might attack the healthy part just as if it were a harmful bacteria. This is called autoimmunity. Autoimmune diseases are also commonly referred to as connective tissue diseases, because the connective tissue in the body is often the target.

The part of the body which is being attacked determines the type of autoimmune disease a person might have.

What Are The Autoimmune Disease Symptoms?

An auto-immune disease can affect virtually any part of the body, including the joints, muscles, kidneys, lungs, heart, and brain. An auto-immune disease can therefore manifest in countless ways. This can range from joint pain, muscle pain, and fatigue to fevers, rashes, and problems with organs such as kidneys and lungs. If a patient has a particular symptom or problem that can not be explained by common conditions, a doctor might suspect an auto-immune disease as the cause, and refer the patient to a rheumatologist for further testing.

How Are Autoimmune Diseases Diagnosed?

The diagnosis of autoimmune diseases is not straightforward, and requires a history, physical exam, laboratory testing, radiography, and sometimes biopsies. Blood tests can be helpful, but often do not hold the complete answer. The most common blood test first ordered when an autoimmune disease is suspected is the antinuclear antibody test, otherwise known as the ANA. There are dozens of other tests, most of which involve the immune system, that try to detect autoimmunity. Blood tests are only part of the workup, and by themselves do not give a diagnosis. Many people have a positive ANA, but have no autoimmune disease (referred to as testing falsely positive.) Other patients might have conditions such as rheumatoid arthritis, with normal blood work (referred to as testing falsely negative.) Because of the high incidence of false positive and false negative blood test results, the diagnosis of autoimmune disease can be a process of careful history taking, examination, and observation over time.

How Are Autoimmune Diseases Treated?